With its Roll of Honour 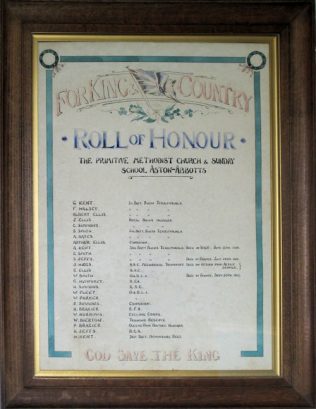 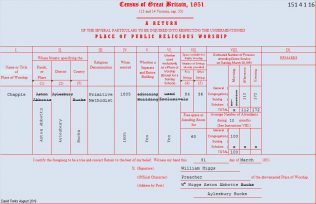 “This chapel had been occupied by Independents for several years.  But on the 3rd of November, 1839, it was opened for the use of our society and congregation in that place, by Mr. Thomas Quarterman; and a very gracious influence attended the word.  Since its opening the congregation has been good, and the society more than doubled.” (transcribed by David Tonks)

The first chapel was built in 1842.  The return for the 1851 Census of Places of Public Religious Worship, completed by William Higgs (preacher) records that 112 people attended the afternoon service and 172 the evening one.

The Primitive Methodist magazine for 1863 contains an account by S Turner Junior of the opening of a later chapel. You can see a picture of the 2nd chapel here.

“A chaste, comfortable, and substantial sanctuary, has been erected in connection with our society in this place. It is, in the clear, 28 by 20 feet, 13 feet high, and lighted by 6 windows. The door, and the 2 front windows, are circular headed, with neat projecting arches of white bricks. The inside has a modern appearance, the pews and rostrum are stained, and the building is an improvement and ornament to the village.

The opening services were commenced on Sunday, Nov. 2nd, 1862, when the Bev. S. Turner preached morning and afternoon in the new chapel, and in the evening the congregation being very large, the Independent chapel (kindly offered for the occasion), was tilled, and a good discourse was delivered by the Rev. G. Moore.

The services were resumed on the following Sabbath, and three excel lent sermons were preached by the Rev. E. Bishop of Bedford. The next day a tea meeting took place, when about one hundred and forty sat down in the old chapel, after which a public meeting was held in the Independent chapel, presided over by the Rev. S. Turner, and addressed by the Revs. G. Moore (Independent), E. Bishop, and J. Nevill.

The collections and donations amounted to about £60 (which is rather more than one third of the entire cost,) of which £20 were collected or given by Mr. Joseph Stranks, £4 7s. by Mr. George Simmonds and mother, £3 by Mr. Ezra Stilton, besides liberal donations from other friends deeply interested in the undertaking.”

The second chapel has now closed and the Roll of Honour is in the Parish Church.