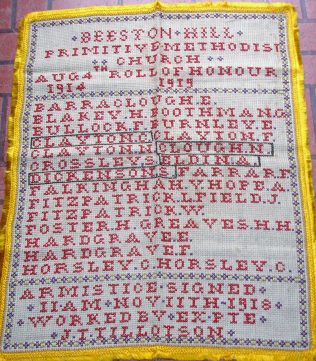 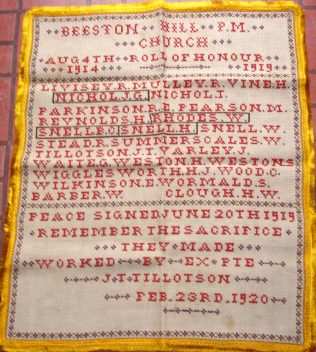 Beeston Hill was a poor area of Leeds, and the Primitive Methodist Chapel started as an iron chapel. Before the war, John Tillotson worked on the railways. Described as a ‘railway servant’, his job was to light the lamps in the carriages.

At the outbreak of the First World War John joined the army as a Private, along with many of his friends from the Chapel. They may have been a close group of friends who had been through the Sunday School together, and were now part of the Young Men’s Bible Class.

We don’t know what John experienced during the war, but it may have been to come to terms with mental or physical trauma that he began to cross-stitch the  names of his friends from the Chapel as a reminder of the sacrifice that he and his friends had made. Not all of his friends returned, and he remembered these by stitching a black border around their names.

John completed the task he had set himself on 23 February 1920. He presented his special and unique roll of honour to Beeston Hill Primitive Methodist Church, to “Remember the sacrifice they made”.