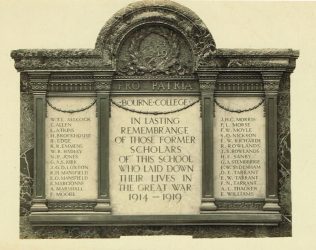 Bourne College, Quinton, Birmingham, was founded in 1876, on similar lines to Elmfield College, a boarding school for the sons of Primitive Methodist ministers.

Bourne College provided secondary education for the growing numbers of Primitive Methodists, especially those in the Midlands, who were aspiring to be ‘Middle-class’.

During the First World War about 300 old boys served in the forces with many receiving bravery awards.

J H C Morris, a brilliant student, was the first to die, while training with his regiment in Northampton.

Mr and Mrs P Rowlands of Erdington lost two sons, and another was wounded.

As a memorial, the Old Boys decided to found an open scholarship, and also to ‘place in the schoolroom a memorial tablet’ to those who ‘gave their lives for their country’.

The memorial tablet, containing 30 names, was unveiled at the annual Prize Giving in July 1921. When the College closed in 1928 it was removed to College Road Primitive Methodist Chapel, but was destroyed when the chapel was demolished in 1967-68.