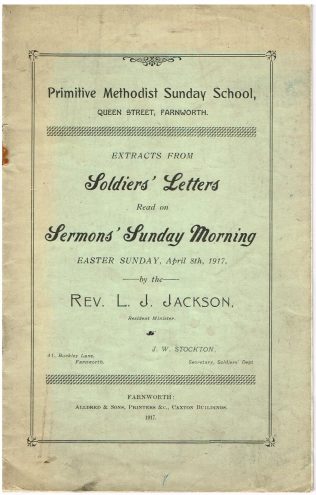 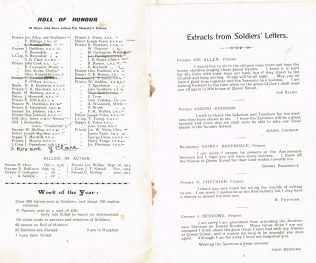 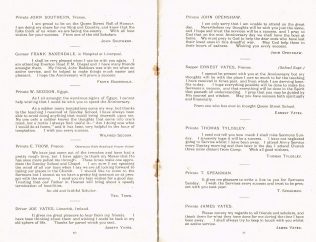 In 1917, Queen Street Primitive Methodist Church decided to mark their anniversary by arranging a ‘Soldiers’ Letters Service’. The minister at the time was L J Jackson and to keep in touch with the 66 boys from the church who were serving in the armed forces, J W Stockton was appointed as Soldiers’ Secretary.

During the year, over 200 letters were sent to young men from the church who were serving as soldiers, and 150 replies were received. The church also sent 72 parcels, at a cost of £25 (only one failed to reach its destination). 150 visits were made to parents and families of soldiers.

At the time of the anniversary 32 soldiers were abroad, 3 were in hospital and 7 had been killed. At least one of those whose letters were read out was to be killed before the end of the war. Among those who died in 1918 were George Clare, who appears here as a handwritten addition to the list of 66 soldiers.

The following soldiers’ have extracts from their letters published in the booklet produced by Queen Street in 1917.