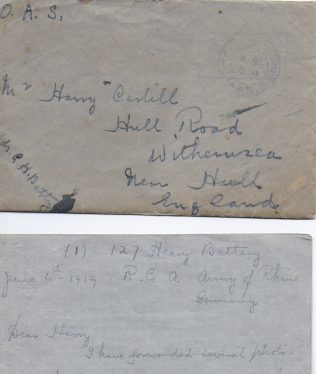 I have an original handwritten letter from G H Batty to Harry Carlill at Withernsea. It provides a small insight into army life at the time and some aspects of religious sentiment. Harry Carlill (1886-1965) was my great-uncle, born in Brough. As a young boy he worked briefly as a gardener’s assistant and then telegraph messenger before, at 17, moving on his own to Withernsea to work for the Post Office where he eventually completed more than 40 years of service. As the main postman in Withernsea he was a well-known figure; he was also a local preacher with strong Primitive Methodist connections. He served more than 25 years as a JP on the Bench at Withernsea. The letter is dated ‘6th June 1919’ (postmarked 8th June 1919) and from ‘127 Heavy Battery, RGA Army of Rhine, Germany’ [RGA=Royal Garrison Artillery], from Bdr [Bombardier] G H Batty. The text reads:

I have forwarded several photographs home to the wife & also requested her to hand one to you, doubtless you will have received it by this, if not please ask for it. Well Harry I am just wondering what sort of a time Keyingham will have this year at their camp meeting, when I was at March quarter day Mr Westmoreland gave me an invite if I happened to be at home, but unfortunately I am here, my luck is out this time I’m afraid, I am canteen manager or better known in the army as “waller”, my duties are not heavy and I am excused all parades & am wearing a protection stripe so of course am known as “Bombadier”. We are stationed about 6 mile from Cologne at a village called Dunwald [Dünnwald], the scenery round about is very nice & cars run in from Cologne, but after all it is not Blighty & one gets very “fed up” with things at times.

I wrote Mr Moore the other week but up to the present have not received a reply, his time will be drawing short now in the Patrington circuit, well he has had a time cram full of experience & strange things have happened during his five years of ministry on the Patrington Circuit.

I get very little Circuit news through, only just what the wife is able to tell me, I suspect you will be busy among the S.S. anniversarys [Sunday School] now, well they should do well this year. Well I have been in 4 countrys & have paid attention to the mode of worship in each & I must say I still think old Blighty is a good first, although this particular part of Germany is Roman Catholic & is similar to France & Belgium, but I understand in other parts the Protestants have the majority. We have an informal meeting at the next village (Schlebusch) Protestant Church on a Sunday evening, conducted by a C of E Chaplain, but the meetings are just like our C of E Service, we suggest the topic for discussion & on the whole have a very helpful & interesting service, we have had for topics, the Holy Spirit, born again, “Christians armour”, but I think the best service was when we had a “supply” as our Chaplain was on leave, and the supply spoke from the parable of “the feast of great price” to a congregation of eight but his address was worthy of 800, it was a spiritual treat. When question time came (and he was a C of E) I asked him if when a man has once acquired or got full possession of the pearl, was it possible to lose it & he answered in his opinion No and he quoted scripture bearing out his conviction, after the service he gave an invitation to Holy Communion and I explained that I was a Nonconformist, but he arose to this occasion & replied that he believed there would be nonconformists in Heaven and we should gather around the same table there, so 4 of us remained one C of E. Wesleyan. Baptist & myself a P.M. [Primitive Methodist] and needless to say we felt quite at home in the service.

I also get a good deal of information from the “British Weekly” especially Dr Jowett’s contributions & Dr Smith but I miss the old Class Meeting and in my case I believe it is responsible for putting within me that spirit or rather developing that side of my nature that has assisted me to overcome experiences in this life (Army) which perhaps would have proved a source of trouble, and with past conversation with you I gather it is the same in your case.

Well old pal I appear to be drifting towards (a paper) rather than a letter, but having to keep a lot of this corked up for so long it is a temptation when one gets a sympathetic congregation.

I shall esteem it a favour if you will let me have a bit of circuit news sometimes & also kindly give my best to all enquiring friends on the circuit also the old class members Messrs Drewery,  Screeton, Cockerline etc.  One is sometimes tempted to believe that it is a case of out of sight out of mind, but however I am looking forward to the time when I shall be working side by side with yourself & the rest of the bretheren.

We are having grand weather here & all nature seems to suggest that the (signing of peace) would be very appropriate.

Well Harry I have written considerably more than I expected & hope it will not weary you, so will close by sending kind regards to wife & family also best to yourself

Researching the names mentioned I have found the following. There were Screetons at Patrington; the 1892 directory shows a Branton Screeton (grocer dealer), Henry Screeton (drapers manager), Henry Screeton (farmer). A George and Andrew Drewery at Patrington Haven are smack owners. The Rev William Moore was leader of the Patrington Primitive Methodist Circuit from 1913-1919; he came from an East Yorkshire family of Primitive Methodist ministers. A George Cockerline was at Weeton, near Patrington, in 1892 as a general carrier. Richard Westmorland was in the 1892 directory for Keyingham as a shoemaker.

G H Batty has proved a bit more elusive. The nearest seems to be a George Henry Batty in Howden in the 1911 census. I would be happy to copy the full letter to an interested family relative or researcher.