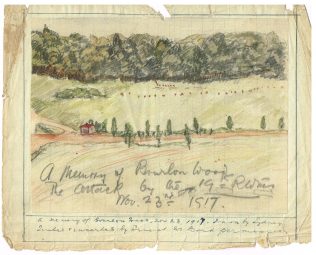 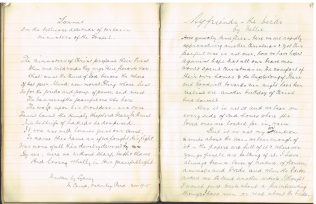 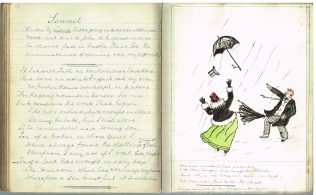 Sydney Phillipson was born in 1892, the youngest son of John Phillipson, a Primitive Methodist minister.  During the First World War he served with the British Expeditionary Force in France.

The family kept a ‘Household Annual’ each year. This was a notebook, edited by one of the children, and filled with contributions from all the family. During the war years, Sydney’s brother Ernest was the editor. He included poems written by Sydney in the front line, and even a poignant drawing of Bourlon Wood before the battle in 1917, as well as ‘Vignettes from France‘.

Sydney’s poems have been extracted from these family annuals, which were rescued from a second hand bookshop by John Anderson.

Sonnet: On the bellicose attitude of certain ministers of the Gospel

The ministers of Christ profane their trust
When with wild words they urge their flocks to war:
What! Must the Church of God become the whore
Of that pur-blind non-moral Thing whose lust
Is for the pride and pomp of power; and must
The banners of the peaceful one who bore
The world upon his shoulders – as a sore
Faint lamb the kindly shepherd bears, be thrust
Into the strife of hatreds he despised.
It were not well however just our cause,
To name this name as if we fought His fight.
Was none of all this devilry devised
By us: were we without sharp teeth and claws
And living wholly in His peaceful light.

To stand aside and know your grief and yet
Find no strong word of solace hurts me sore;
With silent helplessness I long to set
Your feet upon firm ground for evermore.

“Dear silent sharer of my suffering, you
Are more at comfort than you think you are;
My parched heart feels your presence like the dew
That comes through silence from some far-off star.”

I know not how the men of afterdays,
Illumined by the fires that waste our own,
Will speak of this upheaval: will they see
Only the waste, and hear nought save the moan
Of suffering undeserved: or will they be
Spellbound to love and praise
The grit and grace with which men leapt to death –
Young men all keen for life and great careers,
The strength of will with which they fought their fears
Counting their lives a vapour and a breath

I leave to wiser men and calmer times
The smoothing out of all our troubled thought
Of war and whether it is wholly waste
And merely that; and what old wars have wrought
For man, and if they can be placed
As blunders or as crimes.
Or as one factor by which man evolves
And if our talk of men who sacrificed
Our grafting on old Mahmud to the Christ
Is sound or wise: God speed to him who solves.

In Picardy, In Picardy,
The barns are full of garnered grain
Heroically harvested.
Full piteous it is to see
On many a battle wasted plain
The harvest of our youthful dead.

In Picardy, In Picardy
The Reaper came whilst still the corn
Was all unripe: he heeded not
His scythe swept on relentlessly
And youths whose promise was new born
Fell with its sweep and they were not.

In Picardy, In Picardy,
Their youth was early harvested,
The goodly promise unfulfilled
Be yours their kinsmen then to see
The beauty of the youthful dead
Nor let your love for them be chilled.

In Picardy, In Picardy
The ground is rich with Britain’s own
Who gave their utmost; not in vain
If only times to come may see
A juster world than they have known
More frank of love, more free from pain.

‘Written by Sydney before going into action at Bourlon Wood and sent to John to be opened in case he should fall in battle. Thank God the circumstances of opening were very different’.

If I should fall as worthier ones have done
And come no more to England and my own,
no further chance vouchsafed me to atone
For flagging moments in the race I’ve run
Or to complete the work I had begun
I do not wish a tribute wrought in stone
Or any tribute, this I wish alone
To be remembered as a loving son.
Son of a mother, in whose spirit I
Have always found the challenge of God’s light
Wherefrom I may not if I would, take flight
Son of a land that wrought in early days
The freedom which has won her age long praise
Wherefore a son must find it sweet to die.