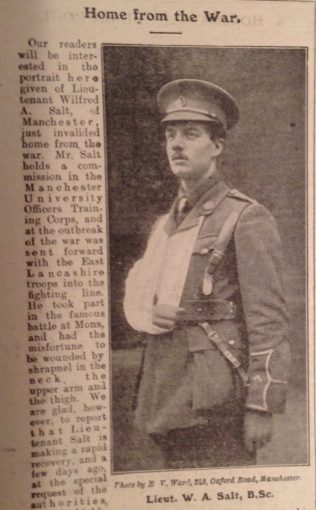 The first casualty to be reported in the weekly newspaper, The Primitive Methodist Leader, on 1 October 1914 was Lieutenant Wilfred A Salt.

Wilfred was an officer in the Manchester University Training Corps, and at the outbreak of war was sent straight to the front line with the East Lancashire troops.

A loyal and faithful Primitive Methodist

He was wounded at t he battle of Mons, and invalided home with shrapnel in his neck, upper arm and thigh. However, the paper reported that he ‘is making a rapid recovery, and a few days ago, at the special request of the authorities, gave a highly interesting account of his experiences to a big gathering of students at the University.’

A ‘loyal and faithful’ Primitive Methodist, Wilfred was a member at Rose View chapel, in the Manchester Fourth Circuit. He played the organ, as well as being a member of the Trust Management Committee, and was related to a former minister at the church, Revd G R D Austin.

A distinguished scholar and soldier

Wilfred was ‘no less distinguished a scholar than as a soldier’. His schooling began at Hyde Road Council Schools, Manchester, from where he won a scholarship to the MunicipalSecondary School. This was followed by three years at the Municipal School of Technology, and in June 1913 he was awarded the degree of Bachelor of Technical Science from the University of Manchester.

At the time he went to war in August 1914, he held ‘a responsible position in a big city firm’.

The newspaper report concluded, ‘Mr Salt is still quite a young man, and we predict for him in the natural course of affairs a still more successful career.’