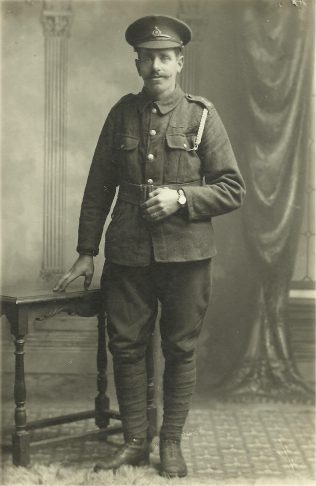 Wilfred Herbert Hillier was born at Fordingbridge, Hampshire, in 1886, the second of 4 sons of Herbert George and Sabina Hillier.  The family roots were in the village of Buckland Newton, Dorset, but in the 1880s Herbert George and his family moved to Verwood, Fordingbridge and Bepton, Sussex, before settling in Chandler’s Ford, Hampshire in 1898.  The family were founder members of the first Methodist Church in Chandler’s Ford, which opened in 1900.  Wilfred Herbert (known as Bert) was Sunday School and Band of Hope Secretary and also organist and choirmaster.

At the outbreak of the First World War, his first instinct was to be a conscientious objector, but he later decided to join up in order to do all he could for the sick and wounded.  He became Private 29663 of the 15th Battalion Hampshire Regiment.  Before he left Chandler’s Ford, the people at the Methodist Church presented him with a watch.  In France, in 1916, Bert met up with his brother Percy, gave him the watch and asked him to take it home and give it to their mother, which he did.  Bert was killed shortly afterwards on 7th October 1916.

The people at the church gave a clock and a memorial plaque in memory of him, which remained on the wall until the church moved into larger premises in 1957.  Bert was posthumously awarded the British War Medal and the Victory Medal.  He is commemorated on the Chandler’s Ford War Memorial and the Thiepval Memorial.

His obituary appeared in the Primitive Methodist Magazine.