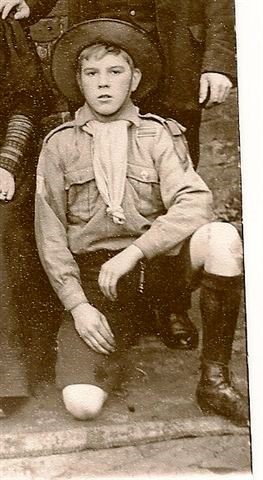 zoom
William as a boy scout

William Owen’s grandfathers, Enoch Owen and George Longshaw, were two of the original trustees of Balls Bank Primitive Methodist Church. His parents, John and Hannah, raised their large family, first at Brewhouse Bank, where William was born on 1 January 1898, and then at Packmoor, where they attended the Primitive Methodist Chapel.

William was employed at Brown Lees Colliery when war broke out in 1914.  He joined the South Staffs Regiment, but was serving with the Suffolk Regiment at the time of his death. He was killed in action on 23 October 1918, aged 20, shortly before peace was declared. He is buried at the Romeries Communal Cemetery Extension in Northern France.

His brother, John Owen, also served during World War One, and survived the war despite suffereing burns.

You can read the full story by clicking on the link below.