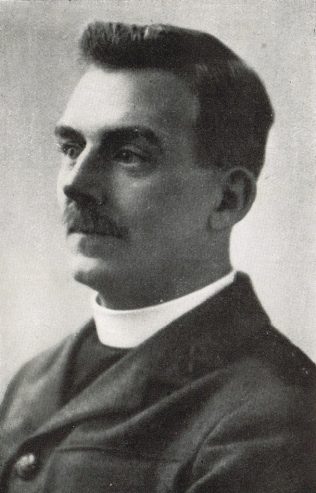 When war broke out in 1914, George Standing immediately volunteered his services and was commissioned into the Royal Army Chaplains’ Department. He was the first Primitive Methodist minister to enlist in the armed forces and after time spent at Aldershot, organising the chaplaincy work with the army, he was sent to the front, serving with distinction in France and Italy. During the war he was mentioned in dispatches four times and was awarded the CBE, DSO and the Military Cross for bravery. He was also awarded the Italian decoration of the Order of the Crown of Italy.

Before the war, after ministerial training at Hartley College he served for six years on the Aldershot Mission.  It was that ‘the pattern of his future life was set’. He threw himself into the life of the Garrison, and soon found that ‘he loved the British soldier and knew that this was his life.’  His pre-war experience paved the way for an outstanding military career which would establish him as the pre-eminent army chaplain of his time.

George Kendall, one of the first Primitive Methodist Army Chaplains, recalled meeting Standing on his arrival in France, in the summer of 1915.

‘It was a real joy to me to welcome one day the Rev George Standing who arrived from home for duty in France. I entertained him in my billet until he received his orders. Padre Standing who afterwards was awarded the CBE, DSO and MC, became an assistant principal chaplain and later the deputy chaplain general at the War office. He little knew then that all those honours would come to him. He was a kind and friendly man and throughout my Army career proved of the utmost help and inspiration to me.’

Men sick in body and soul

His first work included visiting the sick in four hospitals and two prisons, ‘few preaching services, but a simple ministry to men sick in body and sick in soul.’ This was the calm before the storm. He writes that in a few days he hopes to meet up with Joseph Firth, and listen to ‘the story of his terrible winter in the fighting line. It is only when you get here that you can appreciate the grit of the man who has endured such hardness as a good soldier. He has been home, but he has returned to the old place of danger and discomfort.’

George Standing became the Senior United Board Chaplain, and was highly respected by all who met him. ‘More than any other man in our ranks Mr Standing knows the soldier and the sailor; the blood of the men is in him.’

By the end of the war he had been appointed the Assistant Principal Chaplain.  After the war he was involved in France in the secret procedure for the selection of the Unknown Warrior. He then returned to Aldershot Garrison, and in 1929 became Deputy Chaplain General at the War Office. He was also made an Honorary Chaplain to the King. He was respected and somewhat feared in military circles because of his fight for the recognition of Free Churchmen in the services.