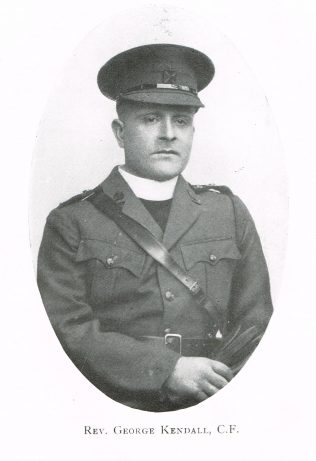 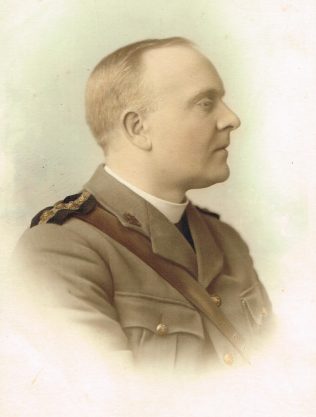 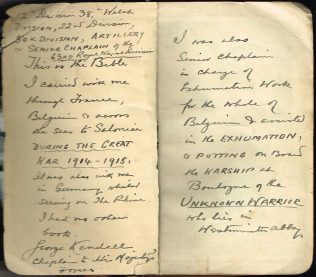 Surprisingly little has appeared in print about George Kendall, who, with George Standing and Joseph Firth, was one of the first Primitive Methodist Army Chaplains to embark for France in early 1915.

Pen pictures from the front

A glimpse into his experiences can be found in ‘Pen pictures from the front’, an article by Rev George Kendall, which appeared in The Primitive Methodist Leader, 10 June 1915 (p 360), as part of a feature headed, ‘Our Army Chaplains in France’.

‘It is Whit Sunday evening, and the soldiers gather for the evening service. ”Boys”, you say, “at home the children are singing their special hymns, let’s have a good sing tonight.” Their faces beam with joy as you remind them of the great children’s gatherings on this day at home. “Any here from Lancashire and Yorkshire?” “Here, Padre!  Here Padre!” and the lads put up their hands. “You remember those processions and banners and bands? You remember the Whit Monday games and teas?”  Remember!  Oh, yes!  Can they ever forget?  And here at the front we live over again those happy days … The old Sunday School is remembered, the teachers and superintendents. Hearts are strangely stirred this Whit Sunday night. Away out yonder our lads are facing death; at home the children are singing.’

Among his personal papers, is a touching personal anecdote from the Summer of 1915, when he was serving with the 12th Division at the Battle of Loos.

‘The next night I visited the men in the front line trenches who were to attack at dawn. It was a dark night and the rain was falling in torrents. The shells were screaming overhead and the rattle of machine gun fire and the star shells shooting up into the sky, made the scene like an inferno. I passed round the corner of one trench and heard one of the men say to his pal ‘everything points ter ’appiness Bill’.  In another part I talked to two lieutenants who were Oxford undergraduates who had joined up with many more from the University.  As is often the case the conversation turned to religion; ‘Tell us padre what will happen to us if we are killed in the attack. Will all the education we have received, all our plans for the future, all our hopes for a long and happy life have been in vain?’  Then I remembered those lovely words from the Book of Revelation and quoted them; ‘He that overcome shall inherit all things; and I will be his God and he shall be my Son… And they shall bring the glory and honour of the nations into it.’

They were both killed in the attack and I thought of the conversation which we had together as I buried them.  In my letter to their parents I told them of our last talk and quoted the same words which I’m sure helped those splendid boys as they went over the top that morning.  It is inspiring and comforting to know that their lives were not in vain and that ‘he that overcome shall inherit all things’.

One of George Kendall’s duties as a Chaplain was to conduct communion services on the battlefield for soldiers who were about to go into action. His chalice has survived, despite being damaged during the battle of the Somme in 1916.

Letter of thanks from Field Marshall Haig

During the war there had sometimes been rumour and innuendo in Britain that the army chaplains were weak and ineffective as support on the battlefields. Chaplains had been pilloried as figures of fun. In March 1919 Rev Kendall was asked to return from Germany where he was serving as a Senior Chaplain on the Rhine, with the occupying forces. He was to be the key speaker at an event chaired by Sir William Hartley (jam) at the Metropolitan Tabernacle, London. Rev Kendall’s task was to put the record straight on the service of the chaplains during the war. He was sent the following letter by Earl Haig to aid him which he read out to the packed hall during his speech.

I am glad to have been given this unique opportunity to express for myself and many thousands who have served under my command our appreciation of the wonderful work which ministers of religion of all churches have carried out with so much steadfastness and courage through 4½ years of war.

To the chaplains of all the denominations serving with our forces this war was a crusade and the inspiration of their teaching has been felt through all ranks of the army.

They taught our soldiers what they were fighting for, strengthening their resolution in time of trial, comforted the stricken and at all times set an example which had a powerful influence for good upon the daily life of all.

No man can lightly estimate how much they have contributed to the triumph of our cause.

After the war, George Kendall decided to build a Church as a personal war memorial to all the soldiers who had died, many of whom he had buried.  St George’s Primitive Methodist Church at Tonyrefail opened in 1925.