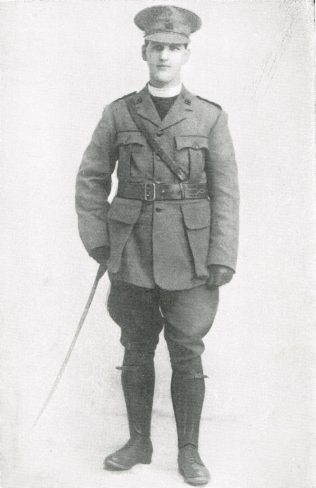 ‘Firth for the Front’

When it became impossible for George Standing to become an Army Chaplain with the Expeditionary Force, Joseph Firth was approached and appointed on 21 January 1915, becoming the first Primitive Methodist Chaplain to serve the troops overseas.

He was described as a ‘big Yorkshireman’, ‘big in soul and in bulk’. Born in Bradford, from boyhood he attended the Primitive Methodist Chapel at New Hey Road, Bradford 5th Circuit. He trained for the ministry at Hartley College from 1906-1909, and was sent first to Wallingford and then to Aldershot. Here, George Standing immediately realised his ability for chaplaincy work, and encouraged and developed his talents.

In 1913 he was married by Rev A T Guttery to a daughter of Mr H Ainger, ‘a well known Southern layman’. He then went to Newbury circuit, before being sent to work with the soldiers training on Salisbury Plain.  In 1915 The Primitive Methodist Leader reported: ‘A thorough man’s man, he has by his cheery disposition carried new nerve and tonic to many a wounded soldier.’

Firth described his arrival in France in an article ‘At the Front’, in The Primitive Methodist Leader, 10 June, 1915.

‘La Belle Croix Farm, which was to be our home for the next fortnight, though having such a high-sounding title, was by no means a pretty or comfortable place. It was situated on the edge of the fighting area in the midst of flat, cultivated country. At this time, January, there was nothing but a wide stretch of brown soil cut into fields by numerous ditches used for draining the land. The men slept in the barns and stables, whilst we slept on the stone floor of a one-time parlour. A neighbouring farm was opened by us as a hospital for our brigade.’

On his second Sunday in France Joseph Firth held a service with the Welsh and Cheshire regiments. ‘Our chapel was the top-most storey of a granary. One by one we had to crawl up a step ladder.

One Sunday he took eight services, and had to cover a distance of about 20 miles. ‘So different to the many succeeding Sundays, when two thirds of the men were in the trenches.’

On another occasion he met a Yorkshire regiment, with 200 non-conformists in its ranks. As there was no building large enough a suggestion was made to meet in the open air, despite the bitter cold and falling snow. To Firth’s surprise, every man opted to stay for the service!

A glimpse into his views on chaplaincy work can be found in an article he wrote, ‘Is Tommy Religious?’, for The Primitive Methodist Leader, in 1917. He believed in exercising a practical Christianity – it was better to do than to say – an approach which was very much appreciated by the soldiers. He often acted as an extra orderly to the regimental doctors when they were short of staff, and dressed minor wounds when necessary. He recalls that he spent many hours massaging feet that were swollen and black with trench rot.

During the First World War, Joseph Firth served as a Chaplain in France, Italy and Macedonia. He was mentioned in dispatches three times and received the Military Cross for bravery.

After the war he was appointed as chaplain to the newly formed RAF and subsequently became the principal Methodist chaplain in the air force. In 1939 he was appointed Secretary of the Royal Navy, Army and Air Force Board, and was later awarded an OBE. He was made Honorary Chaplain to three kings, George V, Edward VIII and George VI, and was known for his integrity, friendliness and humour.

He was particularly known for his ‘genial kindness and pastoral concern’. He died in 1973, in the 64th year of his ministry.