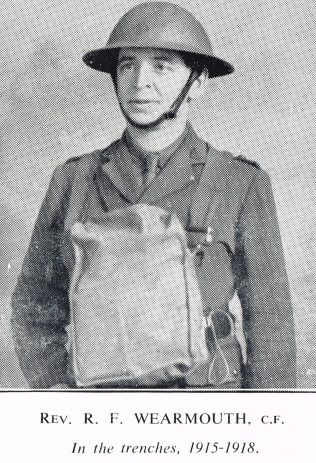 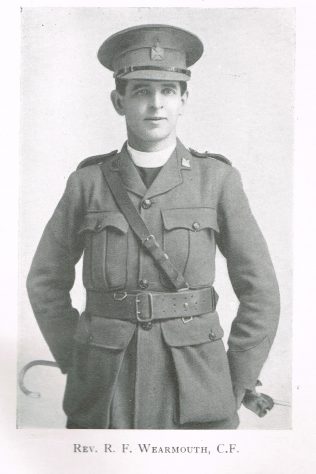 Unlike other Primitive Methodist chaplains, Robert Wearmouth, who started work down the mine at the age of 12, had already served as a soldier.  In 1901, having run away from home, he enlisted in the Northumberland Fusiliers, who were recruiting for the Boer War.

It was while home on leave that he went to a Christian Endeavour meeting at the little chapel in Oxhill, Co. Durham, and had a conversion experience. After leaving the Army he joined the PrimitiveMethodistChurch at Oxhill. He now had a passion to educate himself, working down the mine by day, and studying by night.  Eventually he was able to go to HartleyCollege to train for the ministry, leaving in 1909 for his first circuit in Grimsby.

When war broke out in 1914, he immediately wrote to the General Committee of the Primitive Methodist Church to ask for permission to rejoin the army. However, it had not yet been decided whether ministers should be allowed to enlist in the fighting forces, and his request was refused.

He later wrote ‘the year of 1914 will never be forgotten. It was the year of a national catastrophe, the beginning of a suicidal war, the unfolding of a “Grand Illusion”.

However, it soon became evident that there was a need for Primitive Methodist Chaplains, and with his previous army experience, Wearmouth was an obvious candidate. On 15 May 1915 he received his commission for the War Office.

He embarked for France on 30 July 1915, the only United Board chaplain in a Division of 22,000 men. He sought home service in August 1916, but his request was refused and he continued to serve in France until he was invalided home in 1918. Wearmouth used a bicycle, but noted that the Wesleyan methodist chaplain had a horse!

Work of a Chaplain

After the war he wrote Pages from a Padre’s Diary, giving a fascinating insight into the work of a WW1 Chaplain.

‘For the most part the Padre’s job was diverse, difficult and dangerous. On occasion he had to run the Officers’ Mess, superintend the men’s canteen, sell the cakes, the tea, the Woodbines at five a penny, accompany the troops on their long marches, footslog it on the cobbled roads, be exposed to the sweltering sun or the pouring rain, grope his way through the intense darkness, live with the lads in the narrow trenches, the flimsy shelters, the battered houses, the destroyed villages, the shelter of the ridges. Although unarmed he sometimes went with them over the top, into the fury of the battle, not to fight, but to rescue the fallen, attend the wounded, minister to the dying, reverently bury the dead, write to their loved ones, break the sad news about wounds or death, and to comfort all who suffered or who were in distress.’

Chaplains also had freedom to move about, talk to the troops, visit them in their billets, go with them into the trenches, organise sing-songs and concerts, and arrange religious services whenever and wherever possible. Wearmouth played his concertina to provide entertainment to the troops.

Extracts from his Diary

His diary reveals a mixture of horror and elation.

‘Had little sleep. The gun battery behind the house bellowed all night. On the way to Armentieres I passed several patches of blood on the roadway. Some lads of the Suffolk Regiment had been caught by shell fire. Three of them died during the day. The front was rather lively after dark, snipers, machine guns, and gun batteries being very busy. To feel that one’s life is perpetually in danger gives a new meaning to life and provides a bit of excitement.’

‘First service in a barn where the company butchers were busy preparing for dinner. I arranged with them they should use the chopper while we sang and the knife while we prayed and preached. About 130 men turned up and we had a good service.’

‘Spent the whole day in the trenches. In one place I saw a human skull with two holes in it the size of a penny, and it was cracked. On my way back a whiz bang burst about five yards away from me, a bit too near to be comfortable.’