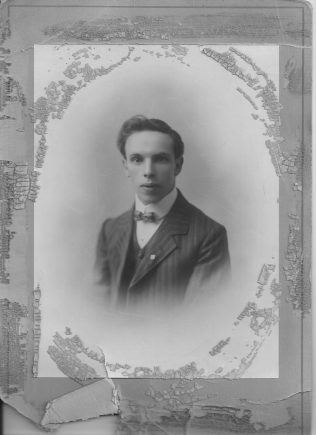 During the First World War, Robert Wright was a conscientious objector. A report of his second appearance at a Military Service Tribunal at Ormskirk, on 1 December 1916, appeared in the Ormskirk Advertiser. He was court martialled on 15 March 1917, and on 11 April was sent to Wormwood Scrubs. He appeared at a fourth tribunal on 23 May, chaired by Lord Salisbury. In June 1917 he was sent to Wakefield Prison Work Centre and later to Manchester to be put to work in a working party.

A market gardener and shoemaker, Robert Wright was born at Hesketh Bank, near Preston, in 1889. In 1911 he married Ellen Miller, and they had two sons and a daughter, who grew up at Rose Cottage, Hesketh Bank. In 1914 Robert became a Primitive Methodist local preacher in the Southport 3rd circuit. He only had an elementary education, but had a great interest in choral music, serving as Organist for the Christian Endeavour and the Sunday School.

Apart from his Christian faith, serving the church in a number of offices, including Trust Treasurer and Sunday School Secretary, his other passion was cricket, and he became Secretary of the Hesketh Bank Cricket Club. Robert’s faith led him to serve the community as a manager of the Council School, and a member of Hesketh Bank Parish Council.

Robert Wright kept a Diary. There is also a log of every sermon/address he preached with dates and places, from 1908 until 3 weeks before his death in 1964.

His treatment during the war years affected him deeply and in 1940 he suffered a nervous breakdown. He also suffered another breakdown in late 1963. Finally in July 1964 he took his own life – the family believing it to be as a result of his wartime experiences.

Diary in the possession of his grand daughter, Joy Higham.