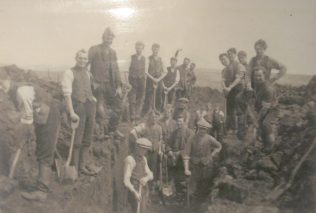 zoom
William Ralph was in a work gang at Dartmoor Prison 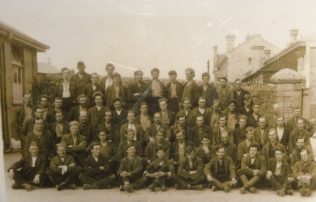 This article is based on an account written by his son Alan Done.

William Ralph was born into a Primitive Methodist family at Bridge Farm, Anderton on 10th June 1892, the youngest child of William and Sarah Ann Done. Less than a year before, his parents had moved from Barnton, where they were members at Barnton Primitive Methodist Chapel on Lyddyett Lane. William was the chapel treasurer when the new chapel was built and they were present at the stone laying ceremony in 1895, laying one of the large stones at the entrance.

William Ralph attended Barnton Church of England School, and then the new Brunner Secondary School, leaving when he was 14, to work on the family farm. They grew arable crops, had a small dairy herd, and did some light haulage for local businesses.  He enrolled at the Verdin Technical School for night classes in Accounts and Book keeping, enjoyed shooting and ferreting in his spare time, and reared poultry to boost the farm stock, and his own income.  In 1912 he was approached by the local Yeomanry, who wanted to use their Shire mare to breed ‘Heavy Hunters’ for the cavalry. When war came, the mare’s offspring, Laddie, was too young for war service.

In 1914 the war broke out in August just as the harvest was getting underway. Many of the young men in Anderton signed on for the army. William Ralph continued to work on the farm. His father was nearing 60, and William Ralph did most of the work of running the farm. He was a vital part of the system.

A hate campaign began with a white feather appearing both through the post and stuck on the farm gate especially when some of the local lads were killed or injured in the war. The War Agricultural Committee issued an order for the ploughing up of grass and an increase in food crops due to the food shortages that were developing.

In 1916, conscription was introduced when the death rate on the Somme had created a huge shortage of front line soldiers. Those over 18 had to register for service. William Ralph was now 24. He registered but as a Conscientious Objector. Several months later he was called before the local Tribunal to have his case considered – his key place in running the farm was not thought valid and his appeal was rejected. He was told to enlist. He refused to obey and an arrest warrant was issued. On 17th April 1917 the local constable PC Allen came to Bridge Farm with the warrant and an order to arrest William Ralph and take him to the local magistrates.

The Court ordered that he be taken under escort to ChesterCastle, the headquarters of the Cheshire Regiment. Here, with several others, he was placed in the guard room. In the guard room they were looked after by a guard who took great delight in spitting at the feet of the prisoners. The next stage was the removal of their civilian clothes with two options to cover their nakedness – an army uniform or a rough blanket. If they chose the army uniform they immediately became liable to ‘justice’ under the army act with ‘shot at dawn’ a possibility. The blanket brigade were subject to court martial and a penalty of six years in jail with hard labour.

William Ralph was processed through the court martial and ordered to serve his six years with hard labour in Wormwood Scrubs jail in North London. The hard labour was the normal mail bag sewing work, with periods in the laundry. During this period there were several Zeppelin raids on London and the tension in the prison was high. Church parade was a short period of relief in the prison life. By late summer 1917 the jails were at bursting point as more conscientious objectors were sent down. Meanwhile William Ralph developed shingles and was transferred to the prison hospital for one week.

The system had to be fixed. The Home Office was ordered to set up a scheme to move the prisoners to places where they could do useful work rather than the usual penal tasks. There was a plan to set up work camps where work of public but not military importance could be carried out. One scheme was a road building project in the Highlands of Scotland and there were further projects in Yorkshire. The use of Dartmoor Prison in Devon as a base was also set up with work at Tor Royal, a farm owned by the Duchy of Cornwall, i.e. Edward, Prince of Wales. William Ralph was nearly sent to Scotland but they reallocated him to Princetown, Dartmoor.

In Dartmoor prison prisoners had to wear the standard jail outfit of drill jackets and trousers adorned with the broad arrows of government property. The COs were given a different style of clothing comprising cord trousers and Derby tweed jackets. These were similar to the jackets used in the Poor Law workhouses and were very coarse and hard wearing. Army style boots were also issued.

The Dartmoor party were transferred from Wormwood Scrubs to Paddington Station and were subject to a high level of abuse from bystanders as they walked to the train. One bystander noted the smell of the new cord trousers and commented. “Baa the smell of Them !”  The rail journey was to Plymouth and then on via the branch line to Princetown. The station in Princetown was just opposite the gates of the early 19th century jail.  The men transferred were a mixed collection of people and included several well known political figures in the 1945-50 Attlee government: Herbert Morrison – Foreign Secretary, James Griffith – Welsh Secretary, Fenner Brockway – later Lord Brockway.

Help on the Farm

While William Ralph was down in Devon there was help for William and Sarah from some of the Chapel folk in Anderton. One local man, a friend from Barnton Primitive Methodist Chapel, Harry Britland, was a shift worker at Brunner Mond Chemical works and when shifts allowed he put in many hours keeping the work on the farm progressing. There was pressure for more food from the farms and William, now over sixty, had to return to full time work. Laddie, the horse bred for army use was now a full time four year old doing his bit for the war effort alongside the shire horses.

Back on Dartmoor the initial stages were disorganised as there were too many men and not enough jobs or equipment. Many of the COs were put to work trying to maintain the prison blocks built to house French prisoners in the early 1800s. The chance to unload building materials from freight wagons was considered a pleasant relief from floor cleaning and laundry work.

Tor Royal – the farm owned by the Prince of Wales was on a section of the moor that had been improved in the 19th century but was not in a good state. A stable party was selected from COs with farming experience and especially those with a background of working with horses.  William Ralph became one of that stable party. They had their work base at the Tor Royal stables and were under the supervision of a prison officer – Officer Yudi (he was some years later to be involved in causing a riot at the prison that destroyed two wings). The aim of the stable party was to plough the moor, sow oats and harvest the crop. Conventional ploughs were used at first but they proved unsuccessful on the old matted turf with huge granite boulders just below the surface. With two horses to each plough damage to the ploughs was high.

A tractor was brought in (Sanderson Mills) but problems persisted. The COs were sent up to the prison quarry for explosives which were transferred to the farm carts and brought back to blast the boulders and make the ploughing easier. Some of the other tasks were less risky – getting fuel for the tractor and lime to improve the land, and carting grain from the station when seeding the cultivated land. Some goods had to be collected from as far away as Yelverton station. This involved a journey down Plymouth Road with a two horse wagon. A spare prison officer rode with the driver. The stable party did not like the cord trousers and boots – they demanded Carters breeches, leggings and boots to match. They gave Frank Yudi grief until they got the same as he had.

Freedom in the local area was possible with roll call at night. Boult’s shop –‘The Mart’ was a popular venue and was still the main retail point into the 1960’s. There was a Wesleyan Methodist Chapel that was well attended and several COs became Methodist ministers, Rev John Gray serving the Methodist ministry until the 1960’s.

For William Ralph life was not completely uprooted by living on the moor. There were other farms in the area and there were farmers’ daughters – chapel was a good meeting point. It was possible to walk over the moors to Moorland farm near Two Bridges and enjoy time with the Dillon family and especially their daughter. By the time William Ralph was moving back to Cheshire an engagement was in the offing but fate took control and in the flu epidemic of 1918 Miss Dillon died and all the well made plans collapsed

1917 to 1918 was very wet in Devon and the land was very difficult to cultivate. Seed was sown in spring 1918 and there was poor germination and slow growth. When it came to harvest there was hardly enough yield from the grain to equal the seed initially sown. For Christmas 1917 a thirty score (600lb) pig was killed to provide meat for the Christmas dinner. It was mainly fat but had flavour and with potatoes and turnip the meal was a high point in prison life. Christmas pudding was spotted dick- using large raisins with the seeds still in them. Christmas tea consisted of two ounces of cheese and a stick of celery between six men plus a slice of currant bread and cup of tea.

With the Armistice in November 1918 the system was relaxed. William Ralph was allowed to return to live at home but not work at home. He was able to work for a local farmer, Harold Frith, at Stone Heyes farm, Cogshall who also farmed Moss Farm at Winnington. This restriction continued into mid 1919 when he finally returned home to work.

After William Ralph returned home he was subject to some ill chosen words from people in the village and in some cases those remarks came from members of the chapel.William worked hard, struggling at times but used the experiences gained from his prison life and farming in Devon. In 1926 he married the girl across the road.

In the early 1950’s William Ralph’s youngest son was called to register for National service and also faced the court as a Conscientious Objector. We were in more enlightened times and his plea backed by his Methodist minister who knew of the family’s views was allowed.

In the 1950’s William Ralph visited Frank Yudi and they talked about the old times. He also kept in touch with at least one of his CO friends until the end of his life.