A circuit minister in wartime 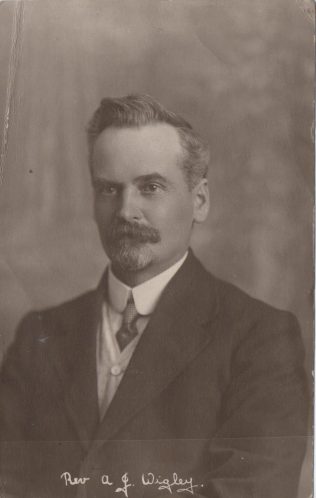 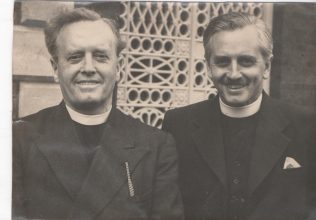 Albert Wigley entered the Primitive Methodist ministry in 1888. After his death, his family discovered his ‘Scribbling Book’, as he called it.

In the words of his son, ‘He was not a man of exceptional ability, nor was he ambitious for office, by he was a faithful and, in the highest sense, successful circuit minister.’

The entries in this little notebook cover the years 1906-1920. They reveal his inner spiritual life, and show that he took his calling very seriously and saw himself as an evangelist and pastor.  The scribbling book is essentially a book of prayer.

Many needs and no balance

From 1911-18 he was minister of the Primitive Methodist Church in the Lancashire village of Banks, near Southport.

During the First World War the family found it difficult to make ends meet, and he brought the matter before his Lord.  ‘Re income, Thou knowest where we are, many needs and no balance. I have given my life to Thee and I trust Thee for supplies.’

Prayer for those at the front

His scribbling book reveals his deep pastoral concern for the boys from his church who were serving in the armed forces.

‘Ask largely that your joy may be full’  Jesus

Bless us, our loved ones, our circuit, our soldier lads, our country.

The Diary of Robert Wright

Fascinatingly, another insight into the life and work of Albert J Wigley can be glimpsed in the Diary kept by one of his church members at Hesketh Banks. Robert Wright, a shoemaker, believed that because of his Christian faith, he could not go to fight. As a conscientious objector, he faced persecution, but unlike some conscientious objectors, found support from his minister, Albert Wigley.

1916, July 24 (Monday) We have made our appeal today in person at Ormskirk offices before the tribunal. My father supported us. Since I finished at the Post Office I have worked at Ormskirk Farm, and Nicholas Whiteside sent a letter in support of my appeal. They never said a word about conscientious objection. I had made myself plain, and our minister Rev A J Wigley wrote me a letter. My brother was also a religious objector. They decided to exempt us until Oct 31st and power to appeal again on condition that we worked on a farm.

1916, Dec 1 (Friday) Again I have been refused exemption on conscientious grounds at Ormskirk. I have had a rough reception. When I went in Col Hopgood opposed me from the first. I made my case as clear as they would allow, but they refused me a fair hearing. They asked me to go to France and work under military orders, but I declined, so they rejected my appeal, and I am now appealing at Liverpool. Rev A J Wigley our minister supported my character in person.

The Military Tribunal was reported in the Ormskirk Advertiser, Dec 7th 1916.

The Rev A J Wigley, Primitive Methodist pastor, of Banks stated that he had been in close touch with the appellant for the past 5½ years, and he had not the least hesitation in saying he was sincere and was a most conscientious young man.

These entries provide an insight into the many different challenges to be faced by a minister during WW1.

It was unusual for a minister to stay so long in one place, but in the scribbling book, Albert Wigley notes on Saturday December 11th 1915:

‘No other door being open but the one indicated by the unanimous vote of the Quarterly meeting to remain here for a seventh year (1917-18), I take it to be Thy will that I am to stay & shall intimate this decision to the Stewards.

The responsibility is great, but Thou who hast bidden me take it up wilt help me bear it. For this mark of confidence I humbly thank Thee & rededicate my life to Thee. Make the remaining years full of blessing.

Thou hast renewed Thy grasp of my hand, Thou mighty Saviour & Lord. Thou hast cleansed my heart & possessed it. Rule there forever.  Seal our decision by much blessing tomorrow.’

A much loved pastor

When it was finally time to move on, Robert Wright records his farewell in his Diary: ‘1918, Jun 23 (Sunday) After 7 years ministry Rev A J Wigley preached his farewell sermons today at Hesketh Banks.’

As the Primitive Methodist Minister at Hesketh Banks, he is mentioned three times in Robert Wright’s Diary.