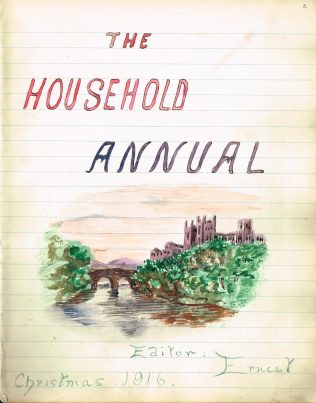 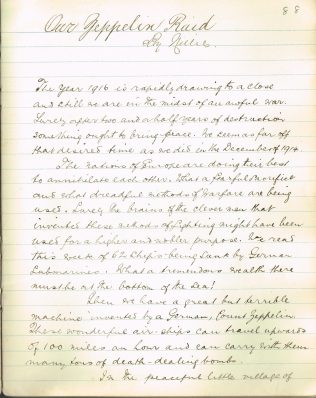 ‘The year 1916 is rapidly drawing to a close and still we are in the midst of an awful war. Surely after two and a half years of destruction something ought to bring peace. We seem as far off that desired time as we did in the December of 1914.

The nations of Europe are doing their best to annihilate each other. What a fearful sacrifice and what dreadful methods of warfare are being used. Surely the brains of the clever men that invented these methods of fighting might have been used for a higher and nobler purpose. We read this week of 62 ships being sunk by German submarines. What a tremendous wealth there must be at the bottom of the sea!

Then we have a great but terrible machine invented by a German, Count Zeppelin. These wonderful airships which can travel upwards of 100 miles an hour and can carry with them many tons of death-dealing bombs. In the peaceful little village of Helmshore a possible Zeppelin raid had been discussed, but the idea was always discounted as people said they could never get that far inland. They had been over London and over towns on the East Coast many a time, but not as far as Manchester and we all felt pretty secure. We were all very mistaken. On the night of Monday September 25th 1916 we had a visit from them. A time never to be forgotten, I think, by any of us.

On Monday afternoon Uncle Emerson came to see us for a long promised visit from the North east coast. After supper we were sat talking-naturally we had a lot to tell each other and time passed on until it was just about 12 o’clock. All at once we heard a bang. Mother said “It’s the Zeppelins. They’ve come at last.”

I rushed out of the door thinking I might get a glimpse of the machine-though the noise of the motors was terrific I did not catch sight of the monster itself. I heard three or four more bombs drop, and then Uncle Emerson called me in. We went into the front room and looked through the window and saw the terrible flashes of light followed by tremendous explosions which shook the house to its very foundations. I thought each minute might be my last and that we might all perish together. However after a few minutes which seemed like hours they wended their way to Holcombe, dropping bombs there. Considerable damage was done to property, but happily no-one was seriously hurt. Then they went over Bolton and here, sad to relate 15 people met an untimely death. We were all very relieved when they went.

Mrs. Hoyle, our next door neighbour was very frightened; she and her husband came in our house and we sat around the fire in the darkness, save for the firelight. I made a cup of tea for us all and then when it struck 2 o’clock our friends left us and shortly afterwards we wended our way to bed. It was only a poor sleep we got. The next day, Mamma, Uncle Emerson and I had a walk round to see the extent of the damage. The first bomb dropped had not exploded- it was only seven minutes’ walk away from our house. Those bombs that had exploded had made tremendous holes in the ground. The houses near the railway at Irwell Vale caught it- one row had all their windows and some of their doors drawn out.

The day after was a memorable one in our district, for thousands of people from far and wide came to view the bomb holes and the general destruction caused.

We have had a taste of German frightfulness and can say with deep feeling- “We desire no more!”’

‘Nellie’, or Mary Helen Phillipson, was the daughter of Rev John Phillipson, a Primitive Methodist minister.  This extract is taken from a remarkable series of notebooks, compiled each year by the family, with every member contributing. Two of her brothers, Dryden and Sydney were serving in France. Sydney’s contributions included a description of his departure for France, and a number of war poems.