'An Appreciation' from Gunner Watson, 1917 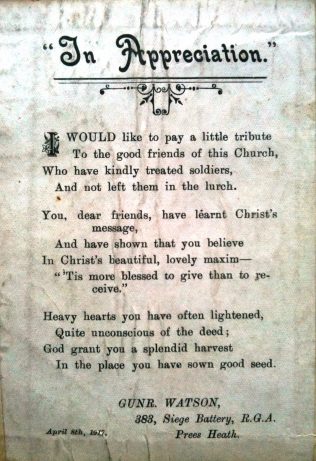 Inside a Primitive Methodist Hymnal, was this label. Was it just one, or perhaps part of a set of hymn books, given to Prees Heath Primitive Methodist Church by a grateful soldier, for their kind treatment. It seems likely that he composed the verse himself.

He would have been sent out with the 383 Siege Battery to Palestine in July 1917, as part of the British Egyptian Expeditionary Force

A training camp was set up at Prees Heath Common, near Whitchurch, in Shropshire, in 1915, and during the war, 30,000 men passed through on the way to the frontlines. It is nice to know that Press Heath Primitive Methodist Church helped to lighten ‘heavy hearts’.