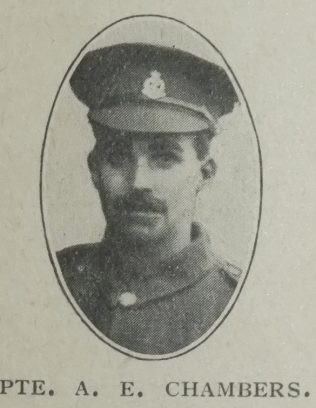 Early in March, 1918, while pursuing the merciful duties of the R.A.M.C., Albert E. Chambers was severely gassed, and, in spite of all that the medical men, nurses and orderlies could do, his spirit departed to be with Jesus. The son of pious parents, both of whom preceded him to the Better Land, he was from boyhood a member of our Church, and actively engaged in various forms of Christian service. His gifts and their culture pointed to a career of distinction, both in temporal and spiritual affairs. Heaven willed it otherwise, and with the great multitude who counted not life dear to them, he has won the renown of those who have saved England and the world in this day of their greatest peril. On March 20th a great company met in our Mount Tabor Chapel, Hoyland, when the writer conducted a much appreciated memorial service.

Before the war, Albert worked as a coal miner.