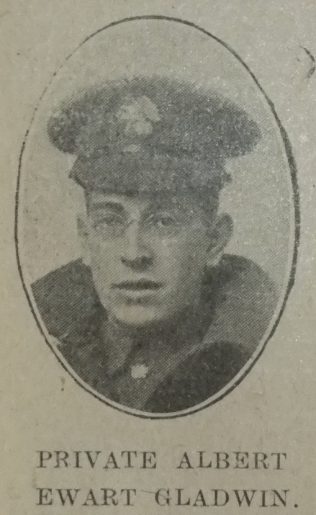 Albert Ewart Gladwin, the younger son of Rev. and Mrs T. J. Gladwin, York, who was killed in action, on 31st July, was born at Mexborough on 22nd June 1897. After qualifying for a teachers’ training college he joined the Public School battalion of Royal Fusiliers in May 1916. He was soon in France and took part in many engagements having some remarkable escapes. Just a short while before he fell, he was complimented on the field and recommended for a commission. He possessed a beautiful, manly and sunny nature. He was beloved by everyone. This was revealed by the largely attended memorial service conducted by Rev. T. Allison Brown. He was welcome everywhere. “The finest dispositioned young man I ever knew” said one. From home, school, church, Army and friends generally came the same verdict. Nothing selfish marred his goodness. He was an ardent worker in the C.E., the Young People’s Class and Mission Band at Victoria Bar Church and gave promise of a brilliant public career. “He was a faithful son and a brave Christian soldier.”

Albert was Private 10438 in the Royal Fusiliers (City of London Regiment), 1st Battalion.