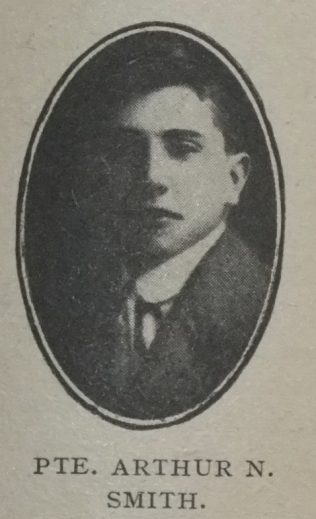 Arthur Nightingale Smith, only son of G. Thomas and Mary Jane Smith, of Consett, was accidentally killed near Aldershot on May 2nd 1917, in the twentieth year of his age.

He was serving his time to dental surgery, when taken by the military authorities and sent to Bradford; then to Blackheath and then to Aldershot, where he underwent his training with the Royal Army Service Corps.

In the fifth month of his training, the horses he was driving bolted and in the terrible accident that occurred he was killed.

He was a fine boy – quiet, modest, unassuming and good – a Sunday school teacher, a member of the C.E. and church choir.

He was a mother’s boy, and when expecting her son Arthur home on furlong, she received a telegram, and expecting an intimation of his early arrival, the mother said to the father, “Be quick and open the telegram! He will be coming home.”

The open telegram announced the sad news that he had been accidentally killed. He was buried on Sunday, May 6th. The Consett Church was crowded and the writer delivered a sympathetic appreciation of his life and worth.

Arthur was Driver T/260358 in the Royal Army Service Corps