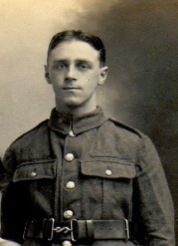 Bert was the eldest child and elder son of Lionel William and Louisa (Louie, née Giltrow) Poulton of Princes Street, Dunstable.  Lionel and his own father William were pillars of the Primitive Methodist Church in Victoria Street, Dunstable.  Bert worked in the hat trade in Dunstable as a blocker, and he had also worked as a grocer in the International Stores in Dunstable.  Bert was married to Fanny Elizabeth Poulton, née Fleet, and had a son, Bertram Lionel, born in 1915.  They lived in Bigthan Road, Dunstable

The following obituary possibly appeared in a Dunstable circuit journal, but I think it may well have been published in a journal specific to the Victoria Street Primitive Church in Dunstable.

We are deeply grieved to record that Pte. Bert Poulton has been called to make the great sacrifice.  War produces many anomalies; for whilst some men, who joined up in the early days, have never seen any fighting, others are rushed into the danger zone in a few months and frequently die a soldier’s death.  Our friend had received but a short course of training, and was engaged in the last big push when he was severely wounded.  Removed from the field, he spent his last hours in the hospital, where he received the tender ministration of a chaplain, who wrote a very kind letter to his wife telling of his dying confession of faith in Christ.  To his young widow and baby boy we tender our warm sympathy, and to his greatly respected parents and relatives we offer our condolences.  Bert was just settling down in life.  His musical gifts rendered him useful in that department of the Church where singing and playing are required.  We miss his excellent violin lead in the Men’s Bible Class.  We hoped he would live to return and become a pillar of the Church; but alas ! he is gone from us, though his dear ones will meet him again.