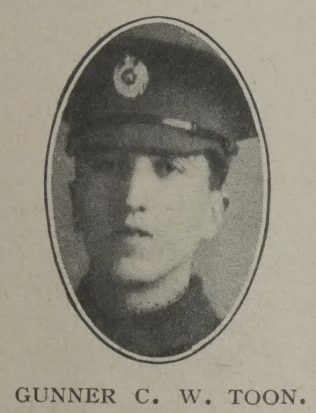 Gunner Charles William Toon, aged twenty-six, paid the extreme price in war on May 28th, 1918, killed by a German shell. He was the second son of Mr. and Mrs. Samuel Toon, and son-in-law of Mr. Francis Ralph, long associated, in each case, with our Fowell Street Church, on the Marylebone Circuit. His widow is left with three young children. The deceased, as a child, was a scholar in Fowell Street Sunday school, and at the time of his joining the Army, was a teacher and treasurer. He also held the office of assistant society steward. He was regular in worship, and devoted to his Church and Sunday school duties. His Lieutenant writes: “he was one of the most cheerful and reliable men in the Battery.” A fine testimony! His constant prayer was that God would grant him a safe return home, for the sake of his wife and bairns. In that form his prayer was not answered: but God has many ways of answering prayer, all of them in love, and all of them better than ours. His loved ones wait in hope.

Charles was Gunner 319318 in the Royal Garrison Artillery, London Heavy Brigade. He was formerly 556497 in the Royal Engineers.