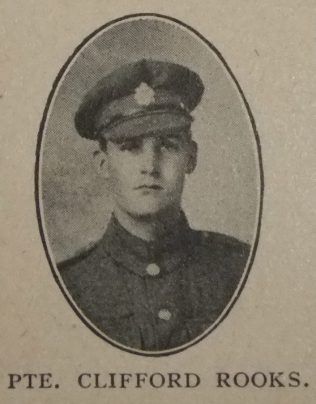 Clifford Rooks belonged to the South Street Church, Yeovil. He had passed through the Sunday school, and was developing gifts and aptitudes for service which would have carried him far in church life. He was an active member of the Christian Endeavour, and as secretary, was winning golden opinions. He also served as Sunday school club secretary with efficiency.

He was called up for the defence of his country on his eighteenth birthday, passed his training, and was attached to the Artists’ Rifles, but after a few weeks in France, was killed near Thilloy, August, 1918. He was brave and buoyant in spirit, loyal to the Master, true to his principles, and has left behind a fragrant record. We hoped he might be spared to his home and the Church, but “God had provided some better thing for him.” He is greatly missed.