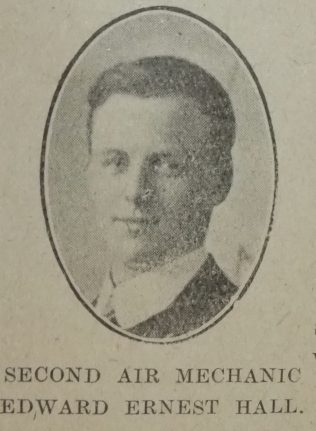 Edward Ernest Hall was accidentally drowned while bathing at Turnberry, Ayrshire, Scotland, on Saturday, 21st July 1917. The son of the circuit steward of the Seaton Delaval Circuit his life had been linked with Primitive Methodism, at Station Terrace, Cramlington, from the beginning. He joined the Church at an early age and consecrated all his gifts to its service. He was quiet and retiring in nature, but was capable of great loyalty to a good cause.

As Sunday School Secretary he kept himself in touch with all modern methods. The children dearly loved him. In the choir he rendered conspicuous service. Always faithful he has left behind a fragrant name.

The body was brought to Cramlington for internment. The service in our own church was conducted by the superintendent minister assisted by the Rev. J.B. Cook, United Methodist Minister, and the local Y.M.C.A. Missioner. The usual tribute of the presence of the Church of England minister at the ceremony in the graveyard was greatly helpful to the sorrowing family. Military honours were paid.

Prior to entering the Services, Edward worked as a carrier.

Edward was a mechanic in the Royal Flying Corps.