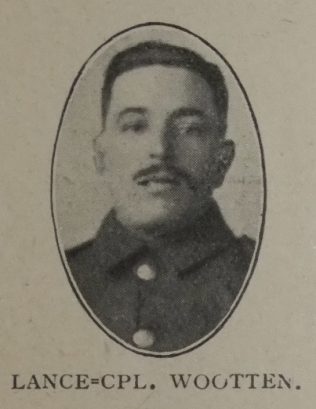 On June 9th Lance-Corporal Edward John Wootten (Royal Berks Regiment, machine Gun Section), passed peacefully away, at the age of twenty-eight, from the Hospital at Etretat, into the presence of God – far from the conflict of the battlefield on which he had fought so courageously for king and country. He had been mortally wounded and badly gassed. Prior to his joining up in January, 1915, he had been superintendent for seven years of the Sunday school at Snelsmore Common, Newbury Circuit), and here on the evening of June 30th, the little congregation to whom he had often ministered, for in addition he was a local preacher, gathered at an impressive memorial service. Of a gentle disposition, he was an attractive personality, and he leaves behind a life of quiet consistency as the best of witness to the reality of his spiritual life.

Edward was L/Corporal 16384 in the Princess Charlotte of Wales’s (Royal Berkshire Regiment), 2nd Battalion. He died of wounds on 9 June 1918.

Note: Official records give the surname as Wootton rather than Wootten