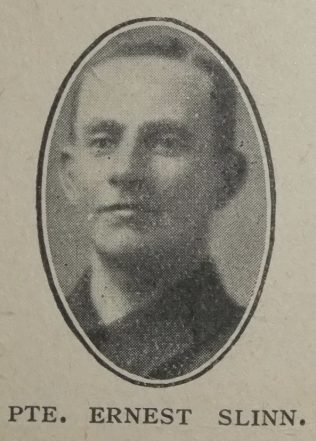 Private Ernest Slinn, of the K.O.Y.L.I.. has been killed in France. He was a Primitive Methodist of the third generation, and a devoted worker in the church at Seaton Delaval. With a bright and cheerful disposition and a studious mind, his life held the promise of splendid service. His last letter to the writer records the joy and profit with which he had read in the trenches Ruskin’s “Crown of Wild Olive’” He was a loyal member of the C.E. Society, and his contributions to the programme were always original and suggestive. The Sunday school called forth his best efforts, and all the children loved him. He hated everything for which militarism stands, and the soldier’s tasks were always irksome to him. We mourn with the widowed mother, who has lost a devoted son.

Ernest was Private 40879 in the King’s Own (Yorkshire Light Infantry), 8th Battalion. He was killed in action on 29 September 1917.

Before the war, Ernest worked as a coal miner.