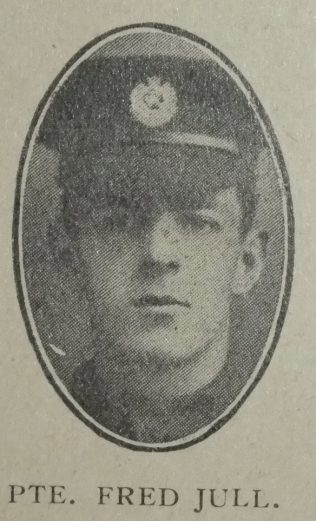 A memorial service was recently held in Saville Street Church, North Shields, for Fred Jull, who died of wounds he received in the “Great Push.” He was a child of the Church. Traditionally he belonged to a real Primitive Methodist stock. His grandfather was Robert Jull, of St Anthony’s, a man beloved for his splendid devotion to the Church. Fred Jull, like so many more, would never have chosen to be a soldier. He believed in his country’s cause, and died to serve her in her time of need. He was quiet and retiring in his disposition, but impressed all who knew him with the sterling qualities of his character. He was brave and generous to the end; he bore his pain with an heroic fortitude. His mortal remains are buried in the quiet cemetery of his native town, his spirit lives as a gracious influence in the hearts of those who loved him.

Fred trained as a joiner before the war.