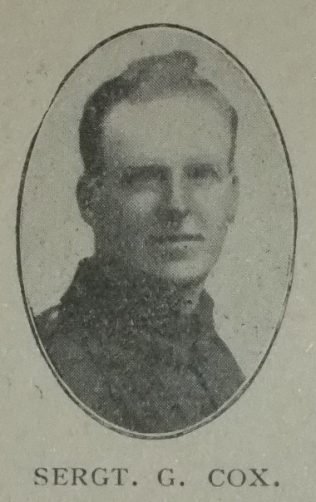 Sergeant George Cox, a member of our Retford Church, and secretary to the choir, was killed in France by a sniper’s shot on September 6th, 1918. Great sympathy is felt with his widow and child, and also with his parents, who are loyal workers and worshippers at Carolgate. Our departed friend, who was twenty-nine years of age, has left behind him the memory of a bright and manly character. Blithe and genial, he quickly won for himself friends wherever he went. His favourite hymns (sung at the memorial service), “We love the place, O God,” and “Breathe on me, Breath of God,” are indications of his ideals. We are the better for having known him, and, by God’s grace, hope to meet again.

George was A/Sergeant 241298 in the Northumberland Fusiliers, 22nd Battalion (Tyneside Scottish). He was formerly 74492 in the Royal Defence Corps.