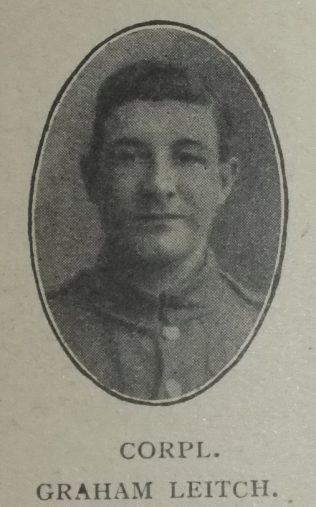 Corporal Graham Leitch, of the 17th Royal West Kents, was killed in action on October 12th. His mortal remains were buried about four hundred yards from Poelcapelle Brewery. “Graham” was converted about ten years ago, during some services conducted by Mr A, Shakesby at our Guiseley Church. Realizing he was “saved to serve,” our brother commenced his ministry in the Sunday School and Band of Hope. At the time of his “passing” he was Superintendent of the Sunday School and president of the Band of Hope. His consecrated earnestness and brightness made him an ideal worker for Jesus Christ among the young folk, and endeared him to all.

At a special service at Guisley, Mr. Hy. Robinson paid an affectionate tribute to his chum, and Rev. Wm. Bilbrough spoke words of comfort and hope to the mourners.