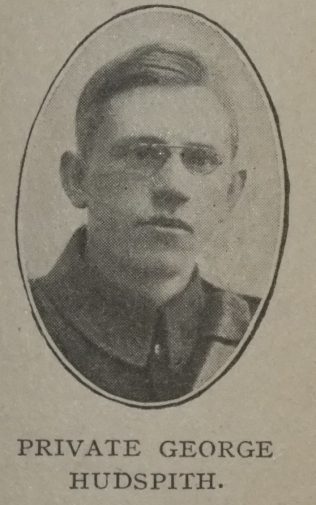 George Hudspith, the oldest son of Mr. and Mrs. George Hudspith, was born at Blaydon-on Tyne in 1896. When twelve years of age he won a scholarship at the Rutherford College at Newcastle-on-Tyne. Four years later he passed the London Matriculation Examination in the first division, and also an exhibition scholarship at the Durham College of Science at Newcastle. He was preparing for his B.Sc. when he joined his Majesty’s Forces of the R.F.A. he was Secretary for the Throckley C.E. Society, and a teacher in the Sunday school. For two years in succession he won the first prize in the Scipture Examination in the Sunderland and Newcastle District, and also the third Connexional prize. After only three months training he was drafted to France as orderly and bicyle despatch rider to his Major. Nine weeks later both he and his officer were killed by a stray shell. Another officer testified to his excellent abilities. We know he was a faithful friend and a good son. He has made a sacrifice which God will not overlook. We look to the day of the glad re-union.

George was Gunner 129329 in the Royal Horse Artillery and Royal Field Artillery. He was killed in action on 5 August 1916