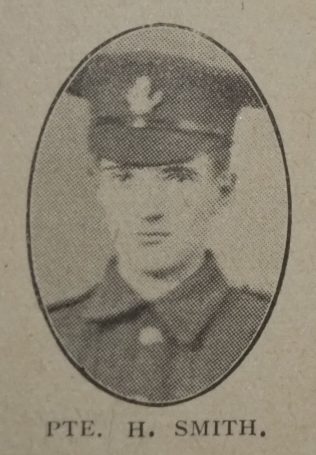 Our Coppull Church and Sunday school are all the poorer through the death, in action, of Private H. Smith. Our deceased friend joined the colours in the early months of the War, when he was only seventeen years of age. He has seen much active service in France, but he was spared all injury until the night of July the 8th, when he was killed instantaneously by a German shell while on sentry duty. He is buried in the cemetery at Vermelles. Private Smith bore an excellent character and officers and men of his unit have testified to the high regard in which he was held. Mr. T. Smith, the father, is the esteemed organist of our Coppull Church, and very widespread sympathy has been offered to him and Mrs. Smith in their sad loss. A memorial service was conducted by the Rev. W. C. Chrines.