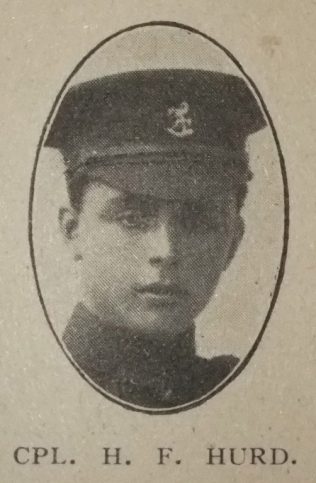 Chatham Church has lost two of its young men during the War, Lieut. May and Cpl. Harold F. Hurd. The last named died in his twenty-fourth year, in France from pneumonia in October. He joined the Queen’s Own Royal West Kent Yeomanry in May, 1915, and served two and a half years in Palestine, where he saw fighting and was wounded in one of the battles. In the spring of last year he was transferred to France, where he again saw many of the heavy engagements. He was a fine, intellectual and handsome man, and as good in spirit as in looks. A memorial service was held in Chatham Church, conducted by his minister, the Rev. J. Thomas Ridley, on November 10th, when much sympathy was shown.