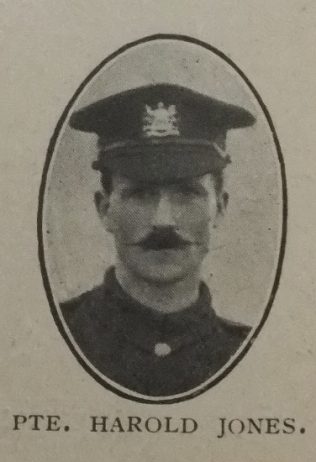 The Higher Wych Society of the Whitchurch Circuit has suffered a great loss in the death in action of Harold, son of Mr. and Mrs. Job Jones. Born twenty-seven years ago, from early years he attended our Sunday school, of which he afterwards became a teacher and the organist. He was also an active C.E. He joined the Army in 1916, and was sent to France in the summer of 1917. He wrote cheerful letters to his parents and friends. In one of the last he expressed a hope of writing to the Sunday school scholars, but on October 6th he was killed by the bursting of an enemy shell in a newly-won trench, and buried on the battlefield. A memorial service was conducted by Mr. G.C. Hockenhull, J.P., on November 4th. A large photograph now adorns the walls of the Sunday school in honour of his services.

Harold was Private 202562 in the Manchester Regiment, 2/5th Battalion