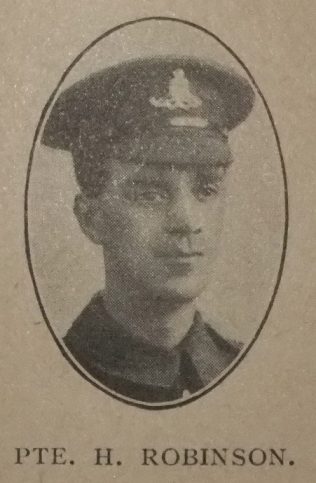 The War has taken from New Hey Road Church, Bradford V., one of its choicest spirits. Harry Robinson was killed in France on October 7th, 1918. He was born on December 1st, 1885, and was connected with New Hey Road Church from childhood. He was a most lovable and winsome personality. His goodness was transparent in his bright face and sunny smile. Though but thirty-two years of age, he was local preacher, school superintendent, class-leader, assistant society steward and president of the Junior Endeavour. He bore a splendid Christian testimony before his fellow soldiers. The Rev. E. Lacey, who was with him when he died, and who buried him, said that it was very evident what a burning and shining light he was. He leaves a widow and little boy.

Harry was Gunner 175495 in the Royal Garrison Artillery.