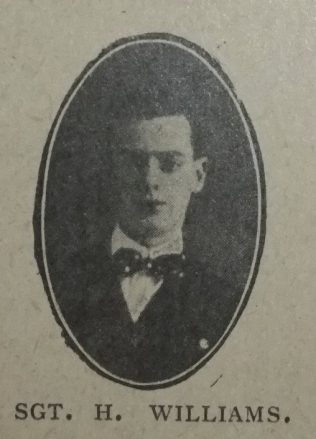 Sergeant Herbert Williams was associated with our Horfield Church, Bristol. He was a young man of exceedingly fine disposition; Sunday school teacher and a Christian Endeavourer. He was also on the plan as an exhorter. Though the Army made no appeal to him, yet in loyalty to his country’s need and call, he joined His Majesty’s Forces in September, 1914, and in March 1915, he was drafted to France. He exerted a most healthy influence upon his comrades. He conducted, at their request, religious services for his men.

He was killed in action on the night of April 24-25th, 1917, and a letter, signed by eight officers of his regiment indicates how much he was loved and trusted. His death is very keenly felt by his parents – Mr. and Mrs. Williams, of Blaenavon – they have our sympathy and prayers in this great loss and sorrow.

Herbert was Sergeant 200570 in the Gloucestershire Regiment, 1/4th (City of Bristol) Battalion (T.F.)