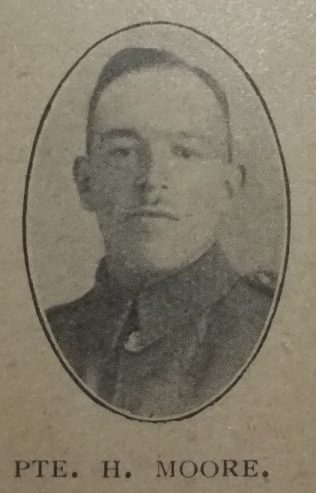 Our Northwold Church and the Brandon and Methwold Station have suffered a great loss by the death of Pte. H. Moore. He had the advantage of a godly training. He was early brought to Christ, and became a member when he was ten years old. At sixteen he received a “note” to speak in our pulpits, and became an acceptable preacher. He took a deep interest in the younger people, and was a frequent visitor at Sunday school and C.E. Conventions in the district. He was musical, and helped in the musical parts of the services. He joined His Majesty’s Forces, and spent a long time in France. He was wounded, but recovered and returned to the trenches. Unfortunately on July 28th he was struck by a shell and killed instantly. His loss to our Church is inexpressible. He ended a splendid career when he was scarcely twenty-six years old. He leaves an excellent father, mother and sister to mourn his tragic departure.

Herbert was a farm labourer before the war.

Herbert was Private 24055 in the Norfolk Regiment, 1st Battalion. WW1 casualty records identify he was killed in action on 28 June 1917.