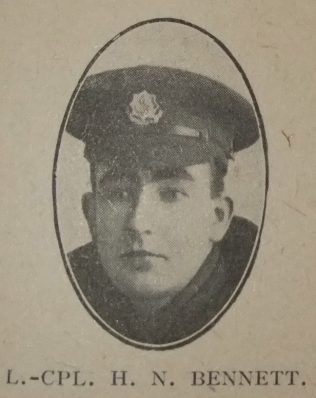 The Warrington Church at Legh Street has suffered loss through the death of one more of the golden boys, who was first reported missing, and then on October 6th, was reported killed between May 26th and June 1st. He was a splendid young fellow of thirty summers who enlisted almost immediately on the outbreak of war, was invalided home from Gallipoli in 1916, being sent to France on March 13th, 1918. He served first of all in the Manchester Regiment, and then in the Cheshires. His remains are buried west of Rhiems. Prior to the War he was a teacher at Clifton, Manchester, where he was loved by all. Returning home at week-ends, he retained his membership with the Legh Street Church. He leaves a wife, who mourns his loss very deeply, also a loving father and mother, sisters and one brother, who has also been wounded. A service was held on November 17th, 1918, conducted by Rev. J.H. Johnson.

Herbert was Private 242838 in the Cheshire Regiment, 11th Battalion. He was formerly 3101 in the Manchester Regiment.