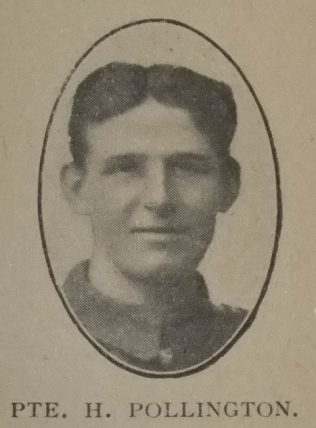 Pte. H. Pollington, M.M., grenadier Guards, joined the Army in 1914, when eighteen years of age. Six times wounded, twice gassed, once shell-shocked, awarded the Military medal for gallant conduct in September 1918, and drowned January 31st, 1919, in Germany after saving four German children who had fallen through the ice, such is the record of the late Pte. Herbert Pollington, son of Mr W Pollington, one of our members at Thirsk. He was one of our scholars, and the Grenadier Guards’ chaplain speaks of him as “the bravest of the brave,” and one of the finest characters in the regiment. He was buried in Sudfriedhof Cemetery, on the outskirts of Cologne, with full military honours. Many wreaths were sent, including one from the mayor of Cologne. The story of his heroism has been widely circulated by the Press, and many letters of sympathy have been received by the parents, including several from Germany, and friends there decorate his grave with flowers every Sunday. A largely attended memorial service was conducted by the Rev. J Toyn on March 2nd, and many of our returned heroes took part in the service.