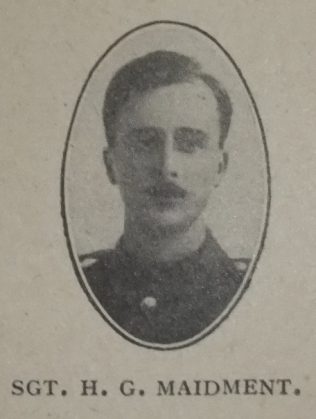 Hubert Maidment was the son of the Winchester society steward. He had been a student in Westminster Training College. Afterwards the L.C.C. appointed him as assistant master of the Daniel Street School, Bethnal Green. When war broke out, he joined the Westminster Students’ Company. He left with his regiment for Malta just before Christmas 1914, and after many months sailed for Egypt. He took part in the fighting on the Gallipoli Peninsula. Afterwards he took part in the Somme battle. He was hit during an advance and at his own request was left in a shell-hole. Some months later photographs that were known to be in his possession were handed to the writer by a wounded soldier, a patient in the Norfolk War Hospital. “I was out searching for water,” he said, “when I came across the body of Sergt. Maidment in a shell-hole. The photographs were in his hand. I took the photographs and buried his body. For his mother and sister the deepest sympathy is felt.

Hubert George Maidment was a Sergeant in the Royal Fusiliers. He was killed in action on 17 September 1916. He served in the London Regiment of the 2nd (city of London) Battalion – Regimental number 2760