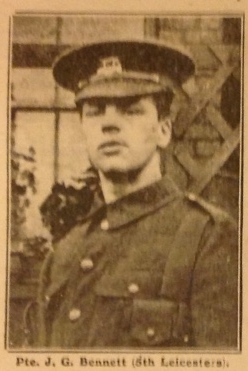 At daybreak on 14 July 1915, George Bennett was on sentry duty in the trenches, when a bullet hit him in the head. He was taken to hospital, where he died the next day. He was just 20 years old.

It was a tremendous blow to his family, and Coalville Primitive Methodist church, where he was a member of the choir and the Sunday School.

His father, Mr J H Bennett, of ‘Kingsthorpe’, Coalville, was the circuit steward. ‘Many hopes were centred in him with respect to the future of our church in which his family holds such an honoured place.’

George was one of the first to enlist at the outbreak of war ‘in a truly sacrificial spirit’, and joined the Fifth Leicesters. In February 1915 he was drafted to France, and before his death had spent five months in the firing line.

His family received letters from his comrades, saying how much they felt his loss, ‘for he stood in high esteem among them all for his bravery and his honest manliness.’

A memorial service was held at Coalville Primitive Methodist Church on 1 August 1915 for Bennett and four others from the church who had been killed.  It must have been a sobering moment for the church, from which no less than 70 young men were away fighting in France.