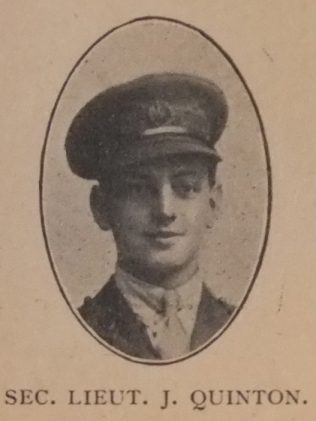 On the first Sunday in August, 1918, Second-Lieut. J.G. Quinton, R.A.F., sat with his parents at the Lord’s Supper in Sea Front Church, Southampton; before the month was out, after taking part in twenty-four bombing expeditions, he met his end. Yet not his end. His life was diverted, and his early promise is being fulfilled elsewhere. He will be greatly missed at Sea Front. He was brought up there as a child by his honoured parents. His father heads the local preachers’ list on the plan  and is the Circuit Steward. His mother is a valued member of the Church. “Jim” was first a scholar, then a teacher, an Active C.E., and a helpful member of the choir. At eighteen years of age the War called him. He joined the R.A.F in November, 1917, and was gazetted as Second-Lieutenant in March 1918. A distinguished audience gathered at his memorial service, for the double purpose of doing honour to his memory and manifesting their sympathy with his parents and relatives.

James served in the R.A.F. 55th Squadron. He died on 30 August 1918. He is buried at Charmes Military Cemetry, Essegney.