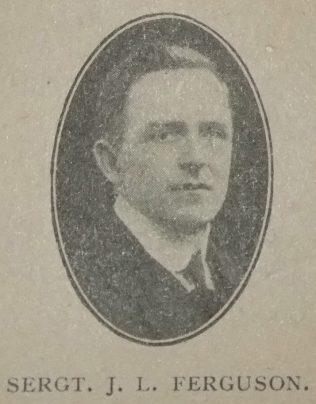 Our church at Oakenshaw, Willington (Co. Durham), has suffered a severe loss by the death on the field in France of Staff-Sergeant J.L. Ferguson. The son of the late Mr. C. Ferguson, he had been associated with our Church all his life. Removing from Lemington to Oakenshaw twelve years ago, he at once threw all his energies into our cause. He was a very acceptable local preacher, trustee for Willington Church, and was architect for the new schools built there in 1913. When the War broke out he was colliery engineer at Brancepeth, and could have been exempt from military service, but he felt the call of duty, and knew that his country needed him. His four brothers also served in the Army at the same time. The other remaining brother served in the Boer War. He went to France in September, 1915, and was in nearly all the big battles on the Somme and Ancre Fronts. He was twice mentioned in dispatches, and received the Card of Honour for distinguished service in the field. He made the supreme sacrifice on November 4th, 1918. A memorial service was held in Oakenshaw Church on Sunday, December 29th.

James was FTR./Staff/Sergeant 90335 in the Royal Horse Artillery and Royal Field Artillery.