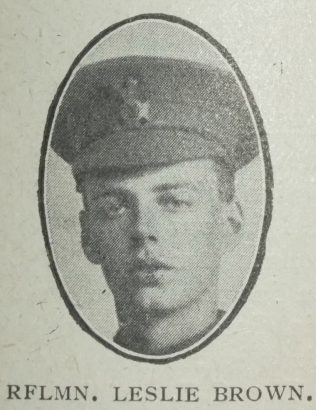 Our New Road Church, Battersea, has suffered a great loss in the death of Rifleman Leslie Brown, who was born on August 3rd, 1898, and killed in action November 30th, 1917.

He was the eldest son of Mr. and Mrs. Charles Brown, devoted members of our Church. Leslie was a member of the Church, secretary of the Bible class, and assistant secretary in the Sunday school. Early in his teens he joined the local Scout Brigade, and attested for the late Lord Kitchener’s Army in August 1915. On February 13th, 1917, he joined the Queen’s Westminster Rifles.

Great sympathy was expressed with his parents, family and friends at the memorial service held at new Road Church on January 13th. Rev. M Featherstone conducted the service.