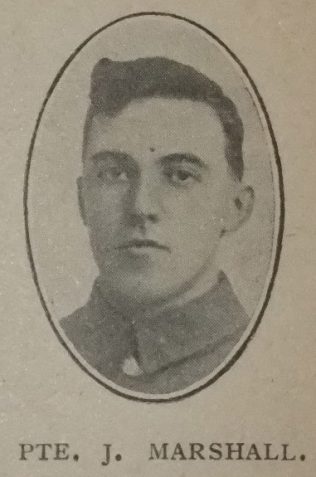 Maple Street Church, of the Newcastle-on-Tyne II. Circuit, has lost one of its brightest and best young men, in the death of James Marshall, who has been killed in action in France, He came at four years of age to the Sunday school, passed on to be a teacher, and at the time of his death was the assistant school secretary. He was of a buoyant, cheerful, frank and winning personality. He was the soul of joy, geniality and kindness. He loved his Church with a rare passion, and was regular at all services. From his letters we gather that the memories of church and home were a great comfort and strength to him on the battlefield. His religion helped him to be brave and to endure. “To live in hearts we leave behind is not to die.” Our friend lives in the life he lived in his gracious example and helpful service.

Before the war, James worked as a joiner.

James was Private 33945 in the Northumberland Fusiliers, 8th Battalion. He was killed in action on 16 August 1917.