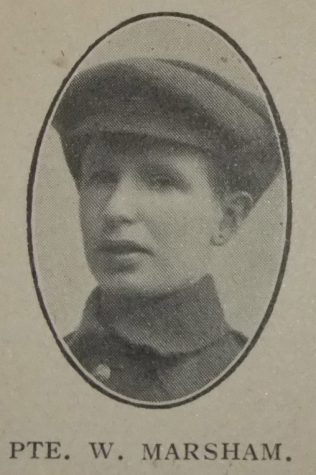 The death of Private W. Marsham took place in Belgium on December 3rd, 1918, in circumstances of peculiar sadness. After two rejections on health grounds, he was accepted in September, 1914, and attached to the D.L.I., and went to France in April, 1915. He went though all the strenuous fights and long marches of that famous regiment until within a few months of the end, when the strain of the War upon a none too robust constitution rendered a change necessary. He was transferred to a Labour Battalion, and sent into the office. Late in November he was seized with influenza. Pneumonia followed, and he passed away in hospital three weeks prior to his twenty-fifth birthday. The second son of Mr. and Mrs G.W. Marsham, of Darlington, he gave promise of a great future.

William was Private 2767 in the Durham Light Infantry and Private 609959 in the Labour Corps.

William worked as a bank clerk before the war.