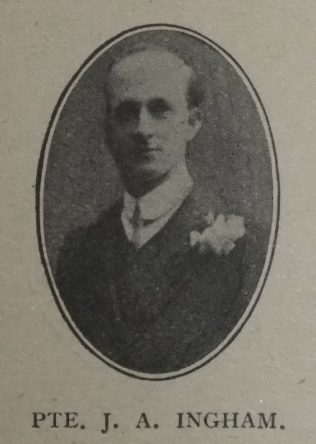 A life possessing rare and rich gifts has been lost to our Bridge Street Church, Heywood, in the death of John A. Ingham, who was killed in France on Sept. 20th, 1917, at the age of thirty-nine. For twenty-one years he was a preacher of outstanding ability and power, and everywhere his services were highly valued. Also for many years he was the teacher of our young men’s class, where he exercised great influence over the members. He was a remarkable student and lover of literature, and as a “Young Liberal” his speeches on the platform and his articles in the local paper were much appreciated. We mourn his loss. Much sympathy is felt for his wife and two children; also for his widowed mother.

John was Private 42186 in the Lancashire Fusiliers 2/5th Battalion.

Before WW1, John worked as a shop assistant. He married Hannah Smithies in the summer of 1903 at Heywood.