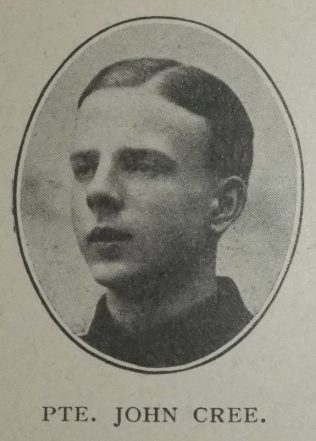 Primitive Methodism in Shildon has lost one of its finest sons by the death of Private John Cree. He was blessed with a godly father and mother who trained him for God. He was a clerk in the Accountant’s Department of Shildon N.E.R. Works. Though militarism was foreign to his nature, on November 15th 1915m he enlisted. After periods of training at Oxford and Edinburgh, he crossed to France on August 9th, 1916. There he experienced the horrors of war. Though he was never wounded, yet life in the trenches brought on diseases which necessitated his removal to a hospital in France. Later he was brought to Stockport, where he passed to higher life on January 17th. He was reverently laid to rest in New Shildon Churchyard on the following Saturday. Prior to the internment, a largely attended and impressive service was held in our New Shildon Church. A memorial service was also conducted at Shildon on February 4th by the Rev. John Brewis.