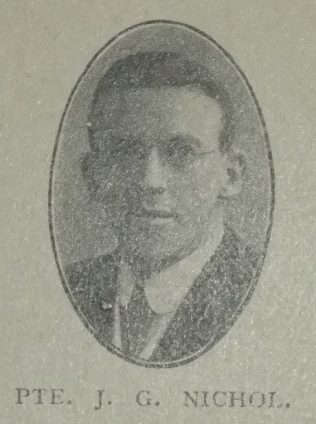 That “Jack” Nichol should meet his death fighting at close grips in one of the fiercest battles of history is difficult for those who knew him to realise. Yet on Easter Monday, April 9th, in active service with his regiment, the 25th Northumberland Fusiliers, he was killed. He was born in January 1888. He was brought up in Primitive Methodist traditions. His father, Mr W. J. Nichol, is perhaps the most widely known local preacher in Yorkshire and in the North. A specially marked influence was exercised over him – so his father states – by Revs. Dr Dalton, A. Jubb, N M. Cuthbert, and latterly by Rev. E. Barrett. Jack was fond of music, and devoted himself to the organ. In Leeds he was organist at Woodhouse Hill, Belle Vue, and Morley. Happy in the possession of an engaging and companionable disposition, he had gained many friends, and the numerous and touching tributes paid to his memory have greatly cheered the stricken parents.

John was Private 38937 in the Northumberland Fusiliers, 25th Battalion (Tyneside Irish). He had previously served as Private 25478 in the West Yorkshire Regiment. Prior to the war, John had worked as a French Polisher.