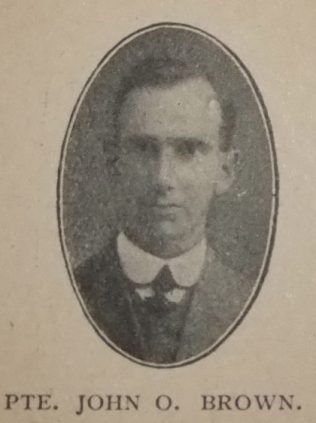 Dearham Society and Cockermouth Circuit received a great shock when it was known that John O. Brown had been killed, October 10th, 1918, on the battlefield in France, after a few months service in the Forces, when acting as a stretcher-bearer. Born into a Christian home twenty-five years ago, and trained in our Sunday school, he gave early signs of goodness and usefulness. About eight years ago he became a member of our Dearham Church. He was greatly interested in the Christian Endeavour Society and served as Secretary. As a local preacher he threw himself into his work with great abandon. He possessed a kindly disposition, lived an exemplary life, and was esteemed by all who knew him. An impressive memorial service was conducted in our Dearham Church, December 29th. Much sympathy is manifested towards his young widow and parents.

John was Private 51498 in the East Yorkshire Regiment, 7th Battalion. He was formerly 29694 in the Border Regiment.

John worked on a farm before the war. He married Ethel Stephenson in the spring of 1918.